5 Jobs for People Who Kinda Want to Leave Planet Earth

In May 2020 two astronauts, Bob Behnken and Doug Hurley, got to leave planet earth in a rocket bound for the International Space Station. And people were jealous. Very jealous.

The launch was historic because it was the first partnership between NASA and SpaceX, and because it featured a reusable rocket (which helps cut costs significantly).

But, that wasn’t what the internet focused on. People were really just jealous because the astronauts got to leave planet earth while we’re all still… stuck here. In 2020. With the world imploding around us.

Congratulations to the Astronauts that left Earth today. Good choice

Unsurprisingly, more than 3.8 million people agreed with him. Leaving the planet can sound kind of appealing in the best of times, and in 2020 the thought is downright dreamy.

The odds of becoming an astronaut are about 0.065% so, statistically speaking, you’re probably not smart or driven enough to do it (no matter what your parents told you growing up). But if you’re still desperate to leave planet earth, getting a job in one of these five super remote locations may just be the next best thing. Cruises to Antarctica are crazy expensive, but getting a job on the icy continent is easier than you think.

There are 70 research stations on the ice operated by 29 countries, and their climate and weather research is incredibly important to understanding the impending climate catastrophe the planet is facing.

The largest American station, McMurdo, has more than 1,000 people living and working there in the summer so they need not only scientists but electricians, cooks, janitors, HR, and every other job required to run a small town.

Jobs in Antarctica are seasonal, so you can escape the real world for the Austral summer (October to February) or extend your stay for a year and brave the 24-hour darkness of the Austral Winter as well. Right now, that doesn’t sound so bad.

If you want to escape civilization and help advance science, getting a job in Antarctica is a great way to do so.

Learn exactly how to get a job in Antarctica (even if you’re not a scientist) and how I landed a kitchen job on the continent! 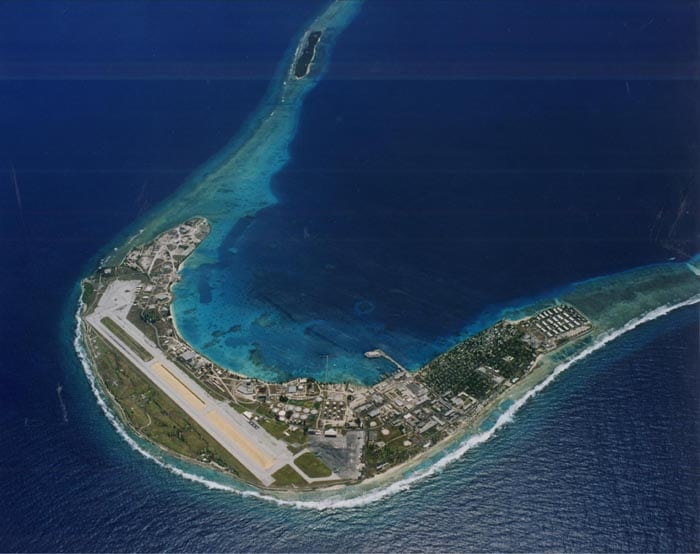 Another great place to escape the real world is the tiny island of Kwajalein. Unlike Antarctica, jobs on Kwajalein are only open to Americans, because it’s a US Army Base… on a tiny tropical island 5,000 miles out to sea.

Kwajalein is one island is the chain of the Marshall Islands in the Pacific ocean, and the US has a contract to rent it for 99 years. Just like McMurdo, the 3-mile by ½-mile island is a small town and thus needs jobs of all types, like teachers, engineers, and more.

Even if you’re not in the army, you can get a job on Kwajalein and enjoy 80-degree weather, swaying palms, sunny beaches, and colorful coral reefs every single day after work.

It’s not quite as far away as the International Space Station, but it’s just a little more beautiful and accessible to those of us who (quite reasonably) just want to leave the freakin’ planet for a bit.

Learn how to get a job on Kwajalein and what it was like when I lived on the remote island as a child! Not the actual Summit Station, but a remote settlement in Greenland that looks pretty similar. I’m working with stock photos here, guys, bear with me.

If Antarctica is kind of far for you but you still want to be somewhere cold and dead (like your heart) consider heading to the Arctic instead.

The National Science Foundation (NSF) operates an Arctic research station in Greenland that is very similar to those in Antarctica, just on a smaller scale.

Summit Station is “a prime site for astronomy and astrophysics research due to its high altitude and dry and stable atmosphere” and “the only high altitude, high latitude, inland, year‐round observing station in the Arctic.” Summit Station is American but many other countries have Arctic research stations in Norway and there is a multi-national floating ship / research station, the MOSAiC Expedition, drifting in sea ice at the north pole as well.

If you’re desperate to leave planet earth in any way possible, though, the Arctic stations are not an easy way to do it. The summer population at Summit Station peaks at 45 people and in the winter it drops down to less than 10.

Still, it’s worth a shot. Literally anything is at this point. Whenever I read articles about cool or interesting or unique jobs, working on a cruise ship is always one of the first to come up.

But honestly, that sounds like hell. Being trapped on a floating city made up entirely of the kind of people who go on cruises (sorry if that’s you but I said what I said) is my nightmare.

Luckily, I found a way better way to escape to international waters for extended periods of time: the Schmidt Ocean Institute, and other research vessels like it. Your work will contribute to science (instead of the destruction of culture and communities in port cities) and you can escape civilization and live at sea. That’s a win-win in my book.

The Schmidt Ocean Institute is particularly compelling to me because it’s a non-profit that lets schools and organizations conduct research on the ship for free. I’m all about a good cause like this and, just like Antarctica, Kwajalein, and the Arctic bases, there are positions on the ship not just for scientists but for a wide array for support staff as well.

The Schmidt Ocean Institute is not currently hiring but a deep dive into the International Research Ship Organization (IRSO) and the University-National Oceanographic Laboratory System (UNOLS) will help you find similar organizations and ships to start your job hunt! Last up on our list of great ways to leave planet earth (for those of us too dumb to become astronauts) are an old-school haunt of introverts-past: the fire lookout tower.

Fire lookout towers have been used for 100 years to do exactly what they sound like: keep watch for forest fires, and sound the alarm if they spot one. They’re not as common as they once were but there are still hundreds of fire lookout towers in the US, Canada, and Australia that need to be manned every season.

Many are super remote – thinking hiking out 20+ miles just to reach them – and require a special type of person that’s ok with long days of solitude. Which is basically no different than our day-to-day life right now, but you get paid.

If that sounds appealing you, join the fire lookout community on Reddit to ask questions and learn more about the job. Of all the places out there in the universe, why’d we have to get stuck on earth?

Leave Planet Earth Behind (Almost) With These 5 Jobs

You may not be able to become an astronaut and move off earth to the ISS, but these five jobs are the next best thing.

Get paid to join remote communities in Antarctica, Kwajalein, the Arctic and aboard research vessels, or even live alone in a fire lookout tower, and escape the real world (for a while, at least) with this guide! a Traveler’s Guide to Ethical Tourism

a Traveler's Guide to Ethical Tourism

Halter Tops Are Back in Style in 2021

Harold and Maude: The film that broke several taboos

Hair Transplant Surgery: Inside the Procedure and Results