Things to do in Sicily


Almost every empire of the last few thousand years has set foot here. Located in the Mediterranean, the island of Sicily is one of Europe’s most unique. People have been living on the island since 12,000 BC and by 750 BC, Phoenicians and Geek colonies started to spring up around the island. Sicily was an important place during the Punic Wars until the fall of Rome when it was then ruled by the Vandals, the Ostrogoths, Byzantium and then Emirate of Sicily. It only became a part of Italy in 1860 so for much of its human experience the island was not even a part of the country people associate it with today. And that’s what makes it so unique. Very few places in Europe were on the confluence of so many people and empires all of which have left their mark on the island in some capacity. Sicily is simultaneously Greek, Roman, Arab, Norman, African, and Italian while also being none of those things at all and simply just is Sicilian.

With the looming Mount Etna dominating the Sicilian sky, the island has a  rugged landscape made up of 9 regions. There are also around 9 cities on the island with Palermo being the biggest and its capital known for its 3000-year-old history, architecture, and gastronomy. Other cities like Catania and Agrigento are home to UNESCO sites and the island itself is one of the hottest in Europe with long dry summers and sunny winters. While some people speak English, most speak Italian with a Sicilian accent, but if you want to impress the locals try picking up a few words in the Sicilian dialect.

Dominating over the landscape is the ever-lasting presence of Mount Etna. The smoking silhouette of the volcanic mountain is an ever-lasting remind of the precariousness of life on the island. The volcano is the second-most active one in the world with smoke billowing out near constantly and it is a pretty big tourist hotspot for that reason.

For adventure thrill-seekers, the trip up the mountain can be as easy or as hard as you are willing to make it. If you’re looking for a low-level activity but still want to go up, there is a cable car you can take and all you’ll need is some spare cash and some good walking boots. The cable is by no means a shortcut though, and you’ll have to do some walking, but it won’t be the same trek as if you started from the bottom. The base of the mountain known as Etna Sud has shops, restaurants, and even a few hotels so you can prepare a bit beforehand. While you can get pretty high up, scaling the summit is not something tourists can do owing to the unpredictable nature of the volcano. 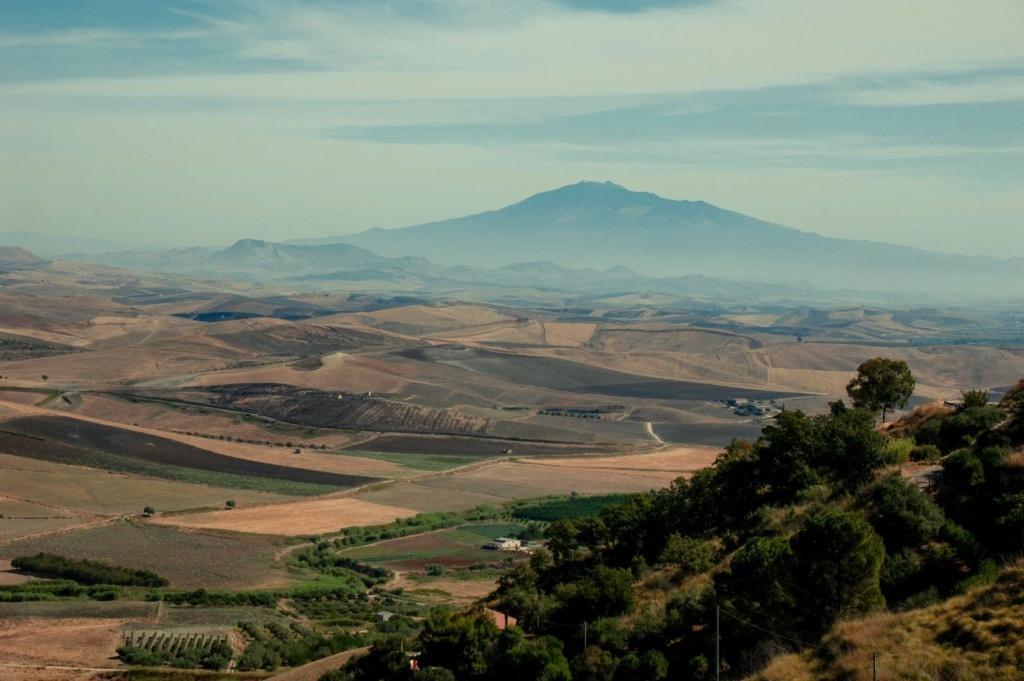 Dominating over the landscape is the ever-lasting presence of Mount Etna.

Spend a day at the beach

Maybe trekking up mountains and seeing volcanoes is a little too much if you’re looking for a relaxing holiday. Luckily, Sicily has some amazing beaches where you can relax, tan, and come back looking like a bronzed god. The island gets dry, sunny heat in the summers, with minimal rain making it a fantastic beach holiday destination. Just outside of the city of Palermo is Mondello beach, a popular place with tourists and locals alike. To access the beach amenities and facilities, you’ll have to pay a small fee but otherwise, the beach is free. Another place to check out if you’re looking to spend an entire day out is the seaside town of Cefalu. The little seaside town has a thriving beach, imposing Norman Cathedral with gorgeous mosaics, narrow streets with little restaurants, and bustling central square. Snap a few shots of the villas and cabins along the beach here and immediately start planning your retirement here.

Feel like an archaeologist at the Valley of the Temples

The story of Icarus goes that when he flew too close to the sun during his and Daedalus’s escape from Crete, Icarus’s wax-crafted wings melted and he plummeted to the sea and drowned. Daedalus sought refuge in Agrigento on the undiscovered island of Sicily and mourned, afterward in Apollo’s honor he built the Temple of Apollo. The temple would become the first of the city’s famous temples.

Of course, that is all just a myth but the Valley of Temples is one of Sicily’s most famous landmarks. In reality, the city was a Greek colony founded around 500 BC and its archaeological legacy remains to this day in a wonderfully reserved state. Believing that Daedalus founded the city of Agrigento, this spot became an important hub for culture and religion.

The area is listed as a UNESCO World Heritage site and in total there are about 7 different temples and other small landmarks in the area built around 400 to 500BC. Some other notable temples here are the Temple of Hercules, the Temple of Concordia, the Temple of Juno, and the temple of Zeus. Some lesser monuments and attractions here include a mausoleum of a former Tyrant named Theron and an 800-year old olive tree. At its height, Agrigento is said to have had over 300,000 inhabitants. 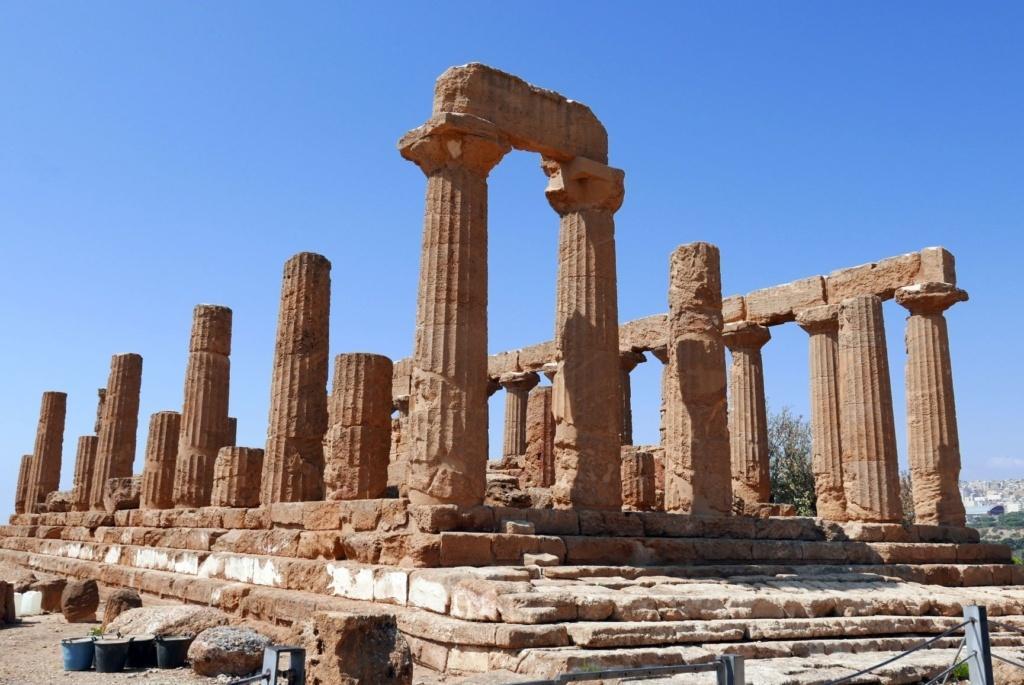 The Temple of Juno at Agrigento. Agrigento is said to have had 300,000 inhabitants at its height.

Marvel at the Roman Mosaics of Villa Romana del Casale

Built around the 4th century, the Villa Romana del Casale is home to one of the world’s most well-preserved and complex Roman mosaics and frescoes. The complexity of the art has made it a UNESCO World Heritage Site and while the villa was abandoned in the 12th century, it took 6 more centuries to uncover its treasures. The frescoes cover around 3,500 square meters of not only the interior but the exterior walls. The quality and uniqueness of the preservation are due in part because of landslides and floods that covered parts of the villa. The entire villa was finally and completely excavated in 1959 showing mosaics of hunting, youths playing, sailing, and perhaps most famously, women in bikinis playing sports.

Eat a (or multiple) Cannoli

“Leave the gun, take the cannoli”. The famous line ushered by Peter Clemenza in The Godfather is one of the most iconic lines in cinema. Take a cue from the movie and make sure you indulge in some cannolis while you’re here. The legendary pastry can be found around the world from Italian bakeries in New York to supermarkets in Australia but the origin of the tubular dessert has its roots in Sicily.

Meaning “little tube” in English, non-Italian speakers might be interested to know that while “cannoli” is said in the singular, “cannolo” is technically the proper pronunciation of the singular. If for whatever reason you’re unaware of this dessert a cannoli is a tube-shaped fried dough, filled with a sweet creamy filling made with ricotta and sometimes dressed with things like nuts, chocolate, fruits, and other sweets.

The origin of the dessert allegedly comes from Caltanissetta sometime around 827-1000 AD and was made by the concubines of the local princes looking to get his attention. Though some other food historians attribute it to a historically prepared treat during the Carnevale season with its creamy center and tubular shape being attributed as a fertility symbol. Its popularity then became a year-round staple.

Cannoli can be found just about anywhere in most bakeries on the island but some of the best are found in Palermo and are specifically made with local sheep’s ricotta cream. 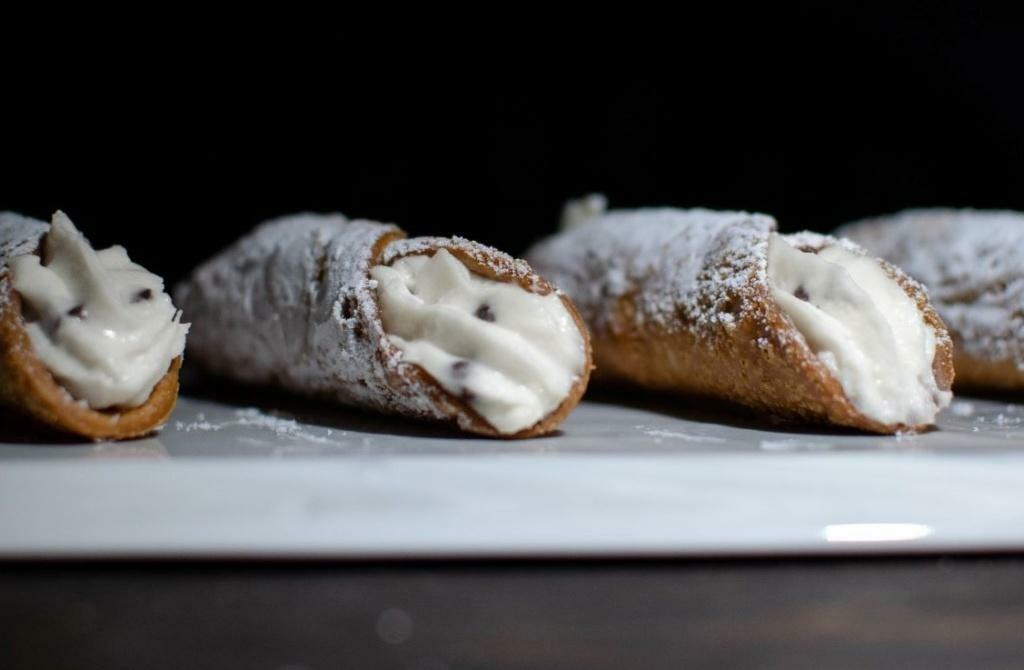 “Leave the Gun and Take the Cannoli.” No trip to Sicily is complete with stopping for a break and having a cannoli.

Explore the local Flora and Fauna at Zingaro Nature Reserve

The local flora and fauna of Sicily are some of the most unique in the area and the Zingaro Nature Reserve is an excellent way to spend an afternoon and do some hiking (especially if you just ate a few cannolis). With the exception of some rural homes, there are no buildings, no roads, and the only noise comes from the wind and the sounds of the Mediterranean. While cities like Palermo are lots of fun, the density and the bustle of life can make anyone want to escape for a while and the Zingaro Nature Preserve is your best chance to do that. Experience Sicily as it was millennia ago with only the sounds of nature and the animals on the island and walk the paths, see the exotic plants, and maybe take a dip in the aqua blue pools.

There is without a doubt some of the best wine-producing regions in the world and one of them is Italy. Italian wines are exported almost everywhere so you’d be amiss if you didn’t indulge (responsibly) in some local wines. The Tasca d’Almerita Vineyards are located about an hour outside of the city of Cefalu and are a paradise for wine lovers. Green rolling hills filled with grapevines as far as the eye can see. Over 1000 hectares of vineyard are found here along with idyllic homes and villas. Sample several varieties of wine such as Inzolia, Catarratoo, and Nero D’avola. Sampling some fine wine wouldn’t be the same without sampling some fine food as well so be sure to book a leisurely gourmet meal with your wine tour.

Italians are fiercely proud of the culinary mark they’ve left on the world and Sicilians even more so. Italian-American cuisine would be nowhere if it wasn’t for the large influx of Sicilian immigrants going to the U.S in the 19th and early 20th century. Along with cannoli, the food scene on the island is one of the best in the world and despite the area’s relatively small size, the food here is diverse, fresh, healthy, and of course, delicious.

Palermo, being the largest city has a lot of spots for dining and is sort of the de facto home of Sicilian cuisine. Although pizza might be credited to the Neapolitans, Sicilian pizza is another world all in itself. Frida Pizzeria is on a picturesque square in the heart of town and serves some of the best pizza in the world. With classically Sicilian toppings like buffalo mozzarella, capers, ricotta, and peppers are grown on Mt Etna you can’t find anything more authentic than this.

If you’re looking for street food try your hand at a Pani ca’ Meusa. One of the most famous Sicilian street food delicacies might seem strange to foreigners but the sandwich made from boiled cow spleen, trachea, and lungs served on a freshly baked bun with some cheese is a classic street food meal. Sounds a little odd but is delicious, ubiquitous, and cheap.

If you’re in  Syracuse check out the huge and vibrant Ortigia Market and have a little bit of everything. While mainly attracting locals, the market is a great place to indulge in local food for a fair price like almond cakes, pistachios, snails, and sun-dried tomatoes. Being on the coast also means fresh fish and seafood are abundant and delicious here. 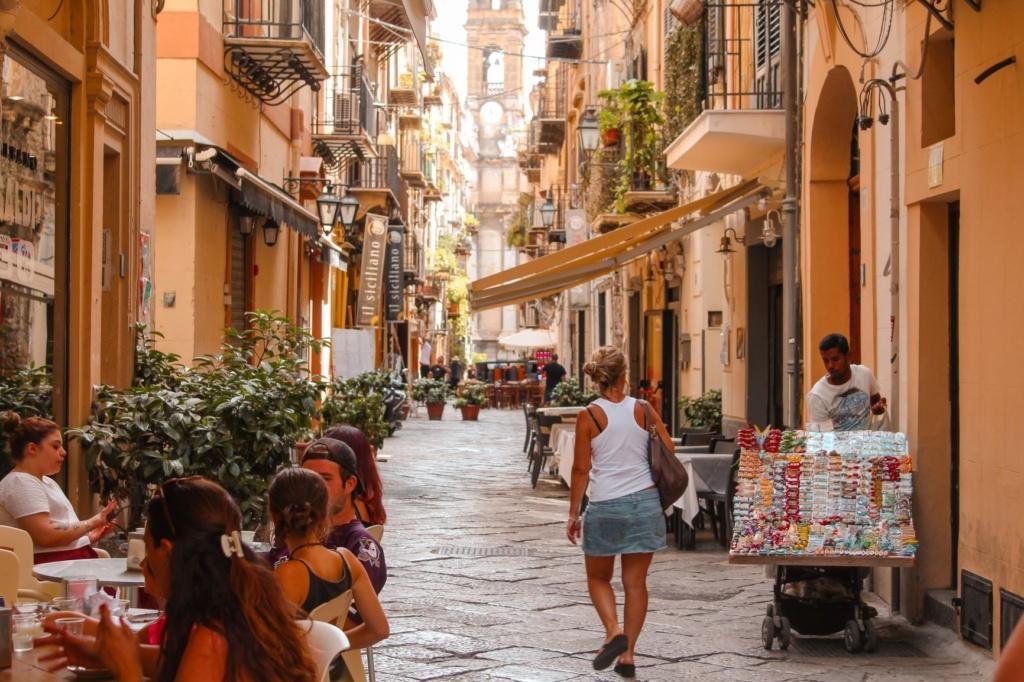 Enjoy Palermo and the vibrant food scene. Kati and I love to people watch and enjoy just sitting a relaxing.

Sicily is a beautiful island with a rich and eclectically diverse history that spans thousands of years. Empires have come and gone on the island and they left a little something behind that makes Sicily truly the unique place it is.

The Lion Hunt of Ashurbanipal: The 2700-year-old ‘fake news’

The Lion Hunt of Ashurbanipal: The 2700-year-old 'fake news'

Why is My Skin Blotchy? (and How To Fix It) From a Facialist