Norway is an incredible destination.  And Kati and I seem to return time and time again.  Most visitors who touring Norway always do the same thing; they fly straight to Tromso to watch the Northern Lights. Yea! It’s true! Tromso is a magnificent place to visit. But for those who didn’t know, Norway is like a magical fairytale. It’s full of remarkable, simple, yet spectacular destinations, making it one of the most beautiful Nordic countries to visit.

Norway is home to the famous fjords, majestic snowcapped mountains, towering waterfalls, and historic little towns. There are numerous places to explore in Norway. Whether it’s an expedition via land, sea, or rail, Norway will undoubtedly blow your mind away, and its stunning beauty will linger in your memories for years to come.

Over the years, Norway has also given birth to several urban cities that showcase the modern Nordic way of life while at the same time reminding you of its historical past. Towns like Bergen and Oslo enthrall with their freshly colored wooden homes and breathtaking mountain landscapes. While Small fishing villages like Skjolden serve as entry points to Norway’s majestic fjords and national parks.

With all this wonders waiting to be explored, the question is:

where should you go?

What places should you visit?

What should you see?

Don’t expect to cover the entire country, though tiny, within a day, or two. To explore the country’s landscapes, and beautiful sceneries, plan for a week or two in Norway.

We  have listed some of the best places to visit in Norway, so grab your winter coat, and get ready for an adventure of your life.

If you’re adventurous and  inquisitive about what to do in Norway, how about trying arctic surfing? It might seem a bit crazy, but you can surf the arctic any time of the year. If you don’t believe it, why not visit Lofoten in January and you will be awe- surprised with people surfing at that time of the year.  By the way, we are only watchers.  Not surfers.  But it still is a cool thing to do.

The surfing lessons in Unstad Beach in Lofoten are terrific even for beginners, . You can learn simply surfers tricks and try your luck when the tide is low. But if you’d rather watch from a distance, chill, and get to watch some jaw dropping terrific surfers do their thing.

Plus, the views surrounding the beach are incredible, including spiky mountains, rugged coastline, and white sandy beaches—definitely, a spot not to miss. If you still have some days, Visit the Lofoten War Memorial Museum; filled with  World War II memories.

Other must-see attractions include the Lofoten Aquarium, the Norwegian Fishing Village Museum, and Magic Lofoten, a collection of sculptures showcasing local life. 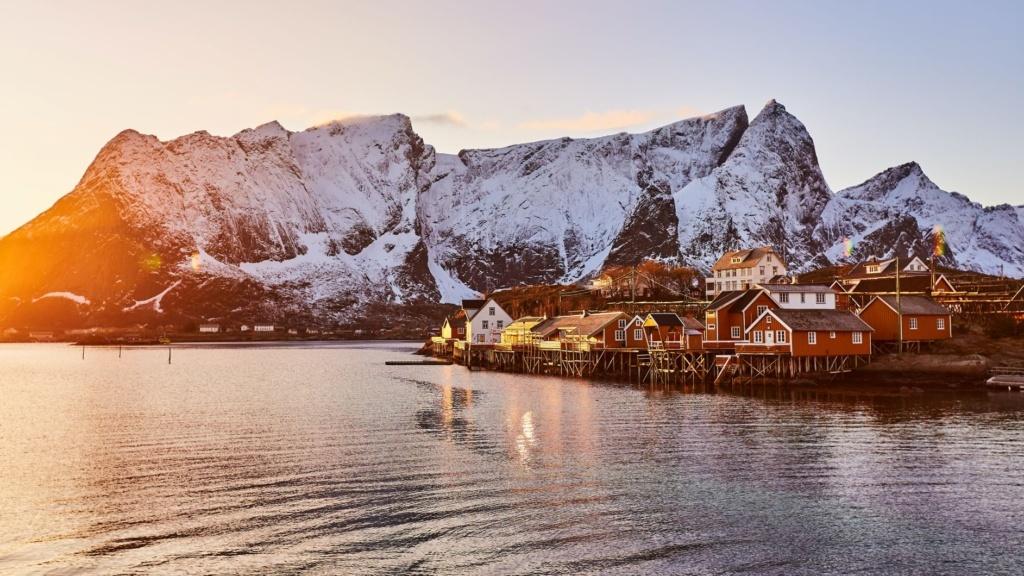 Have you ever queried what life was like 3000 years ago? Well, the Iron Age Farm builders  sure tried to recreate those ancient memories. This charming farmhouse takes you back thousands of years back, offering a a glimpse of life, and culture  back in the day for the Nordic inhibitants  how life was for those who inhabited between 350 and 500AD.

Engineers created a replica of the ancient sites that archeologist found underneath the current Iron Age Farm. You will be mesmerized by how different historic scenes have been re-created to represent specific times in history, including one where you will enjoy preparing, cooking, and dining  food made from  the early settlers’ menu.

Also known as the Pulpit Rock or  Preikestone is one of the most iconic monuments in Norway. Predictably one of the most famous hiking trails in this region. Movies like “Mission Impossible” and “Fallout”  based  in Hollywood have  been shot at this location.

During the high season, you’ll find hoards of tourists sunbathing on the flat top on the Pulpit Rock, mostly made of a drooping granite prow. Preikestolen stands majestically over  600 m above the Norwegian scenic Lysefjord, stretching over 20 miles long  from the Preikestolen’s summit.

The standard trail route, stretches nearly  400 m over a mile and a half  from the car park at Preikestolhytta. the path is well-marked, with patches of mud and rocky parts in some spots.

Swim in the alpine lakes on warm days. The mountainous terrain is quite  scenic, just before Preikestolen, after the famous spot,  take  the 100 m 3 stroll to the Neverdalsfjellet summit, with stunning 360° views of Lysefjord and the breathtaking island bays near Stavanger.

Conveniently located near Stavanger, reaching there requires a bus ride, ferry ride, and then a two-hour uphill climb to get to the scenic flat-top cliff, which offers some stunning views over the Lysefjord below.

The climb up this stunning mountain  is not for the faint-hearted. But the good thing, though, is when you reach the top, the rewards are worth your efforts. If you are brave enough, you can step out and peek over the edge of the cliff- the pictures in awe! 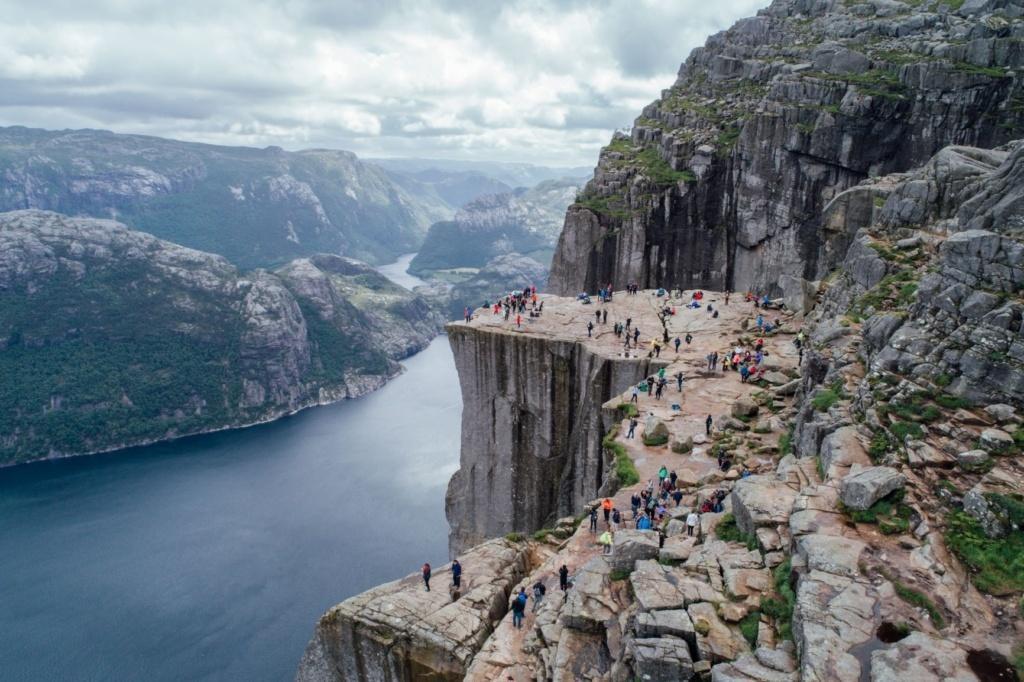 Preikestolen has become one of the most Instagram photos online, and it will probably be crowded. The hike and mountains are magnificent though.

There is just something mystical about this flowing waterfall north of Norway. You can find the Steinsdalfossen waterfall deep inside the quiet countryside of Geiranger, a picturesque village that plays host to iconic Geirangerfjord fjord and other numerous waterfalls.

Touring the Steinsdalsfossen Waterfall is certainly a place worth visiting. The 50 M waterfall is a darling to many, in fact, a Norwegian favorite.

Can you imagine walking behind a wall of water gushing down with such a  force? This is possible as some engineers cleverly placed a cement pathway that snakes behind the waterfall – isn’t that amazing?

Night-time is the absolute time to watch this wonderful waterfall. The night sky and the shining moon make the waterfall glow with shades of blue and purple.

It is advisable to visit this region at the end of spring when snow is melting, and the waterfall is full.

The Kannesteinen Rock is a magnificent ocean attraction located in a rural village Oppedal on Norway’s western coast. It’s renowned for its unusual shape.

This beautiful metamorphic rock has a goblet-like shape from being pounded by ocean waves year in year out. It’s amazing how this piece of art has withstood the awful winds of Vagsoy that bring about rough current.

Though the rock looks unusually thin in the middle, it is still very stable; you can comfortably stand on top of it with ease, usually in the mind of most tourists, especially photographers.

So if you happen to find yourself in the west coast part of Norway, be sure to stop by Kannesterinen Rock.

Will you be spending a few days in Bergen? If yes, then whether you will hike up, ride up, or bike up, exploring Mount Floyen is one of the most exciting things you can do while in Bergen. Raising approximately 400 meters above sea level, Mount Floyen will surely reward you with authentic, memorable views of Bergen city below.

While most people prefer riding the Flobanen Funicular to the top, you can opt for the steps if you are energetic enough. Even though hiking up is not an easy task, you will be treated to spectacular views of the boat-filled harbor to your left, the historic Bryggen to your right, and the never-ending North sea on the horizon. Oh, and don’t forget the beautiful deep fjords surrounding the mountain. 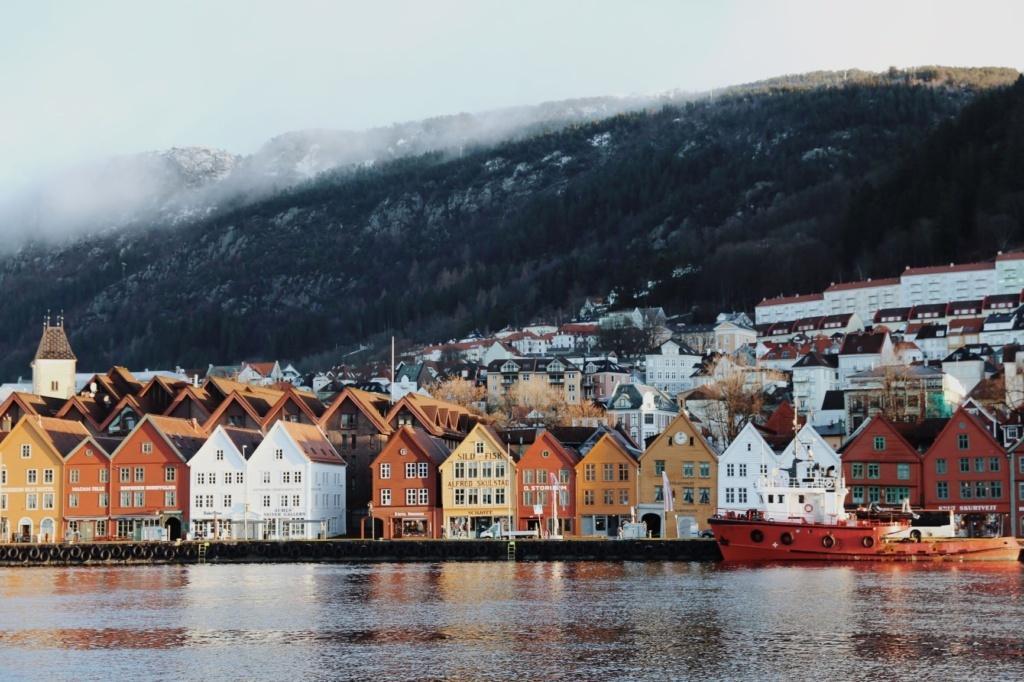 Head to Bergen for a uniquely Norwegian experience.

Vigeland Sculpture Park comprises  a lifetime of work by Norwegian sculptor Gustav Vigeland dedicated to the human form. He worked for nearly  20 years, between 1920’s – 1040’s and donated his life’s paasion of sculpturing to the city of Oslo. The sculptures comprise  of human symbolic subjects in everyday life, the most notable ones include “Man Attacked by Babies,” and “Woman gathering babies around her.”

“The Monolith” is a extremely symbolic  consisting of 123 entwined humans symbolizing the desire to implore out to divine powers. “The Wheel of Life” represents eternity in harmony  with four human and a babe protected in a circle.

Vigeland Sculpture Park is located in Oslo and is perched at the heart of Frogner Park. This sculpture park is the most visited free tourist attraction site in all of Norway.

The free entry park is always open. You can spend your day understanding these magnificent bodies.

Located in Luster, The Urnes Stave Church is one of the most renowned medieval churches in Norway. A tour to this region of Norway will not be complete without visiting this famous olf church.

Dreamily set on the shores of Lustrafjorden, flanked with lofty mountains, and beautifully covered in intricate wood carvings of interweaving vines; the church resembles a forgotten scene from The Lord of the rings film. Dating back to the the12th century, see the fascinating  Viking architecture of comprising of wooden planks and beams.

An interesting thing to note is the  secrecy with which the churches carry out their affairs. Visitors are  allowed to take interior photos. A quick search on Google will reveal exterior photos only.

Spend your day exploring Viking history; you will need special permission to take photos, especially the church’s inside.

Longyearbyen is Norway‘s northernmost city. Planked at the furthest end of the world, you have no option but to dress heavily, and the fun part is you get to ride in a boat.  The population in this tiny city is a mere 2000 people.

You will learn a lot about this arctic little city, including why they don’t bury people in that region. The place is soo cold that the body will never decompose; the area is like a temporary morgue.  Kati and I have planned a trip but was cancelled for two years because of the Covid pandemic.  We will be going next February (2022) and experience this incredible destination.  Also, check out Xpedition Arctic as we will be adding a Longyearbyen adventure for up to 6 guests.

With so much to offer, Norway has a vast array of attractions. Getting from one place to the other is quite easy owing to Norway’s state-of-the-art transport system. Whether you opt for the modern electric rails or the medieval coastal streamers, you are up for the time of your life as there is a lot to see as you travel through this beautiful country.

Norway is regarded as one of the happiest countries in the world. This prosperous country has some of the most welcoming and friendly people. If you feel lost or you have a question, don’t hesitate to ask; approach any Norwegian. They are always happy to help.

Head to Norway if you truly want to live life, have fun and travel through one of the nicest and most friendly countries of the world.

10 Best Things to do in Belgium

Internet Dating Slang Terms You Need to Know in 2021

Get To Know: Andrea & Kasey, On & Off The Screen